Time to show off another of the images from my header, and this is the portrait that I call Twenties Girl. 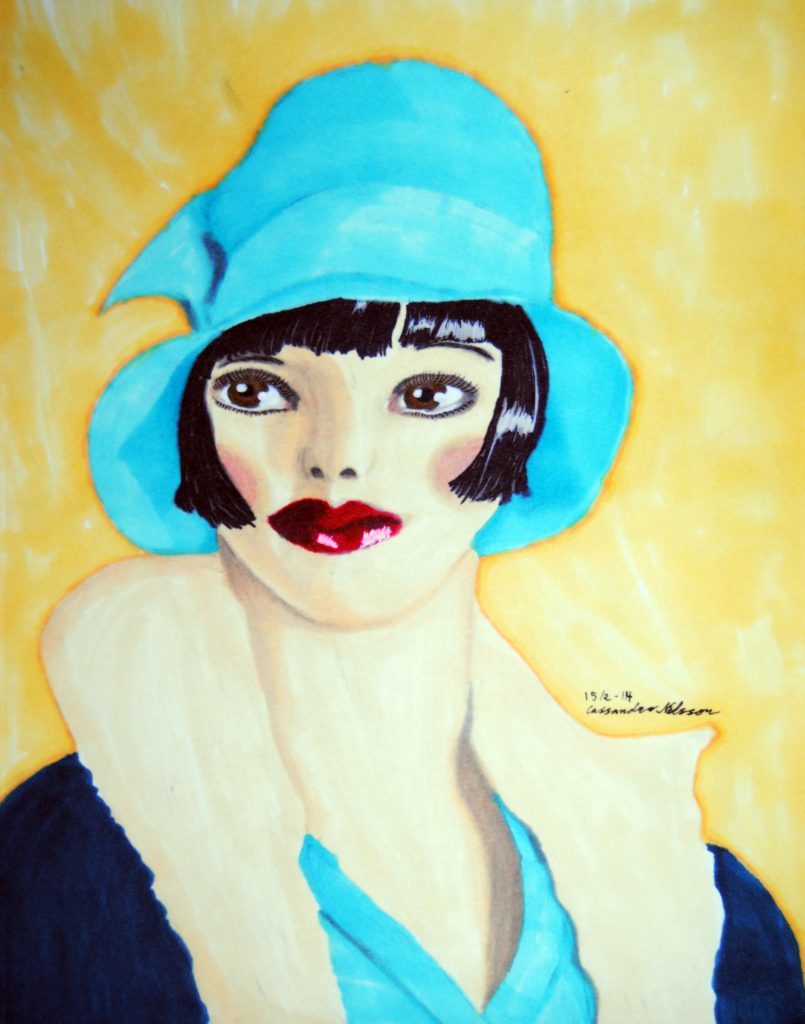 I got inspired by this photograph of Louise Brooks and used it as a model for shadowing and pose, but didn’t attempt to really draw her. There’s something about the fashion of the period that’s really striking.

I like the colour choices that I’ve made in this picture. Blue and yellow works nicely together, and while the splotchiness of the yellow is due to it running out of colour it looks intentional. Like a wallpaper.

Last April, I landed myself in the ICU after what was probably a bad reaction to medication. As they treated me, they also took an MRI and discovered a cyst in my pituitary gland. Over the year it grew at a rather alarming rate, so it was surgically removed in December 2015.

My therapist suggested that I do some drawing to try and deal with what happened. This is the first one I’ve done. 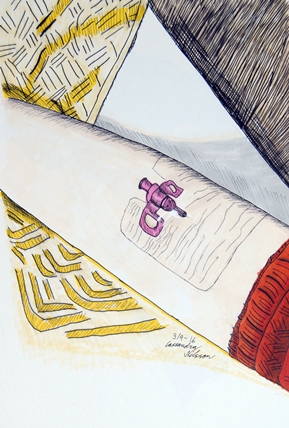 Originally, I wanted this to be an ink pen sketch. But while I could tell what it was supposed to depict, I doubted that others could see it and when I asked people it was confirmed. So I decided to use ProMarkers to colour it, producing a neat comic book-feel which I really like.

This is my arm during my first SYNACTHEN-test in August. Crash course in pituitary gland function: it’s sometimes referred to as the master gland due to its control over a lot of our hormones. One hormone under its control is ACTH, which sends a signal to the adrenal glands to produce cortisol. During a SYNACTHEN-test, synthetic ACTH is injected and the medical personnel then draw blood to test the level of cortisol. If your body responds properly to the stimulation, you’re not suffering from adrenal insufficiency. Mine didn’t respond as it should have.

Basically this is a picture of the time I got my diagnosis of secondary adrenal insufficiency confirmed, which sucks. I don’t know if it’s due to the personal significance, but I feel that this is quite the scary image. 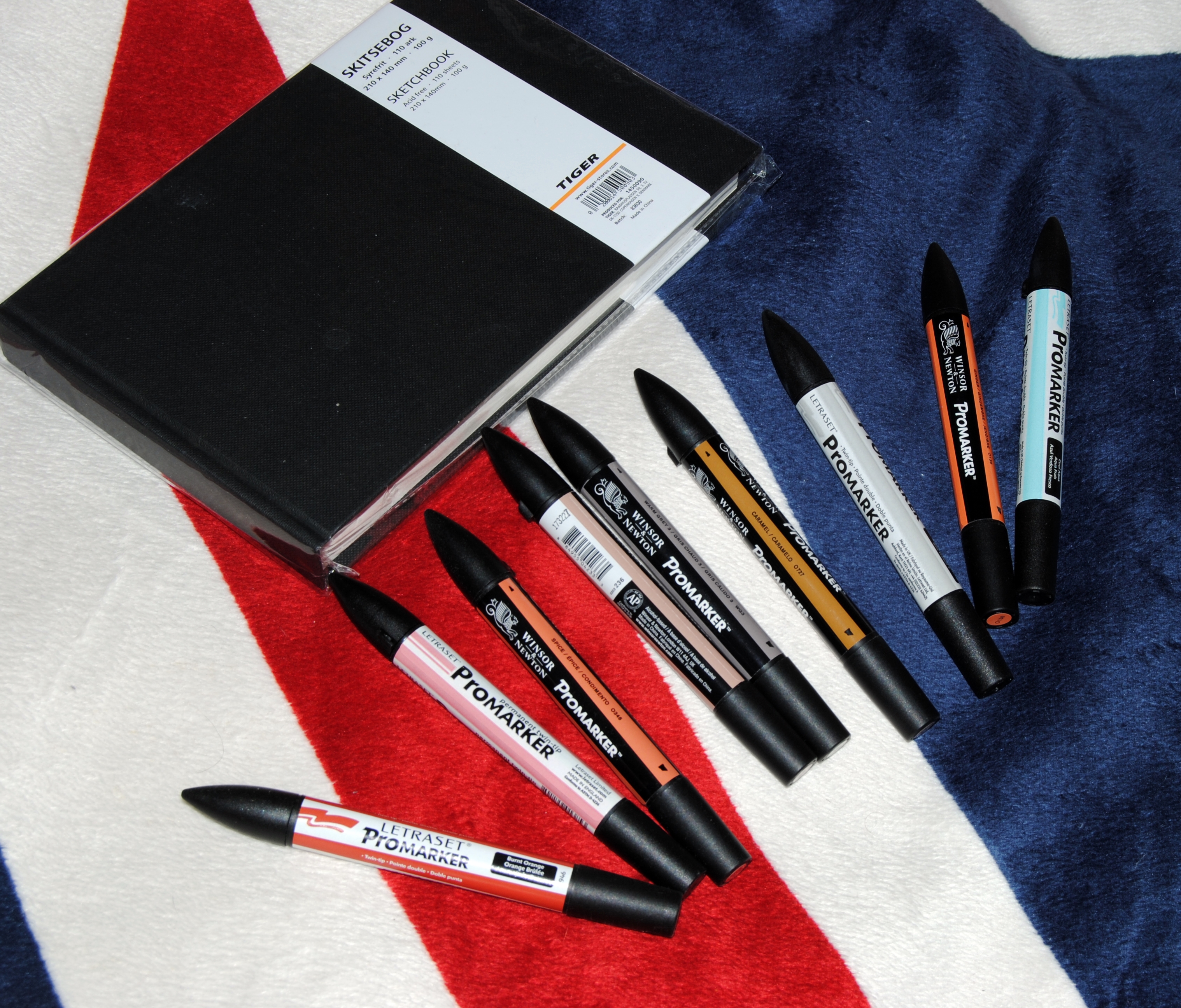 I graduated this year and my mum got me this sketchpad as a graduation gift. It’s great with these smaller sketchpads that can fit comfortably into a purse or a backpack, don’t you think?

And I’ve also bought quite a few new markers, as I’ve felt that I’ve lacked certain shades to work properly. My new promarkers are not from the same occasion, but spread out on several trips.

The new promarkers are the following colours:

The latest trip took place this Saturday when I participated in an event where we got to draw models wearing pirates-inspired clothing. (I’ll post those sketches soon, even if the thought of doing so makes me cringe.) I managed to keep myself down to three markers that I need for a current project: warm grey, caramel, and tan. This is the project in question:

Fanart for Diana Gabaldon’s Outlander-series. This is sort of how I imagine Jamie Fraser. I needed some more neutral colours for the tartan and realised that I’m horribly lacking in them. What can I say? I like bright colours. 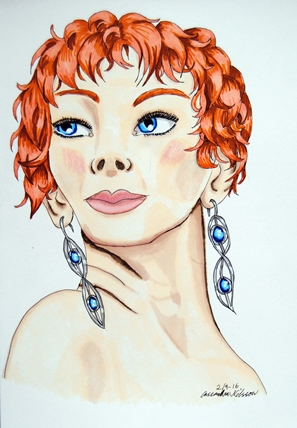 I met up once again with the group of Urban Sketchers. This time we went to another cemetery, called Norra kyrkogården (Northern Cemetery.)

I found an interesting gravestone to draw: 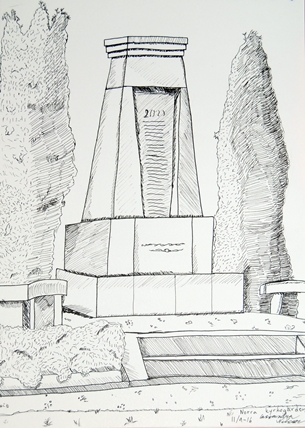 I wanted to work on perspective and on drawing a scene, not a lone structure. This oddly shaped gravestone with its benches and the bushes that flanked it on either side gave me an opportunity to work with this.

Experimented a little with structure on the left bush and didn’t feel too happy with the result, but felt that I had to commit once I’d started. I felt a little happier with it the next day. The empty space behind the gravestone bothered me, but adding the trees in the bakground would make it feel cluttered. Now I’m not too bothered by it. I feel that a lot of my craft knowledge is coming back, piece by piece, and that it’s getting easier to get back into the rhythm of things.

If you’re looking for any logic to how I choose which drawings to show you, there won’t be any. I’ll just pick some random old picture which I like. 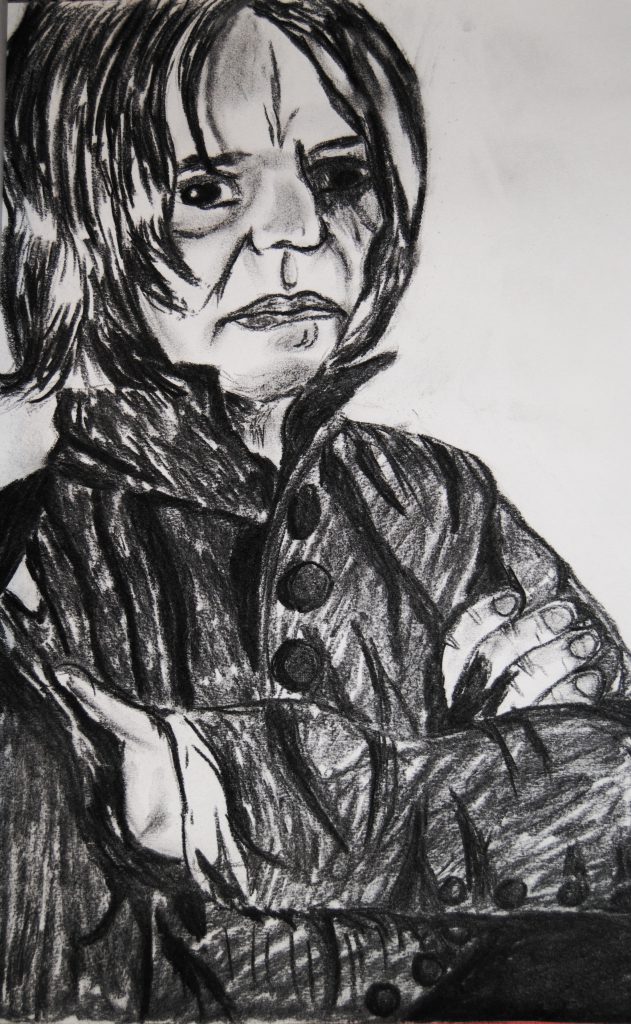 I did the sketch for this back in, maybe, 2009. It then sat forgotten as a couple of lines in a sketchpad until last year, when I dredged it up and decided to finish it. For some reason I decided against cleaning up the sketch, even though the hands are a mess. I hadn’t done any work in charcoal for a while, but I’m still rather happy with how this turned out. It’s recogniseable as Snape.

I turn to my living room at times for inspiration, and after my mother’s birthday this lovely composition happened to catch my eye. 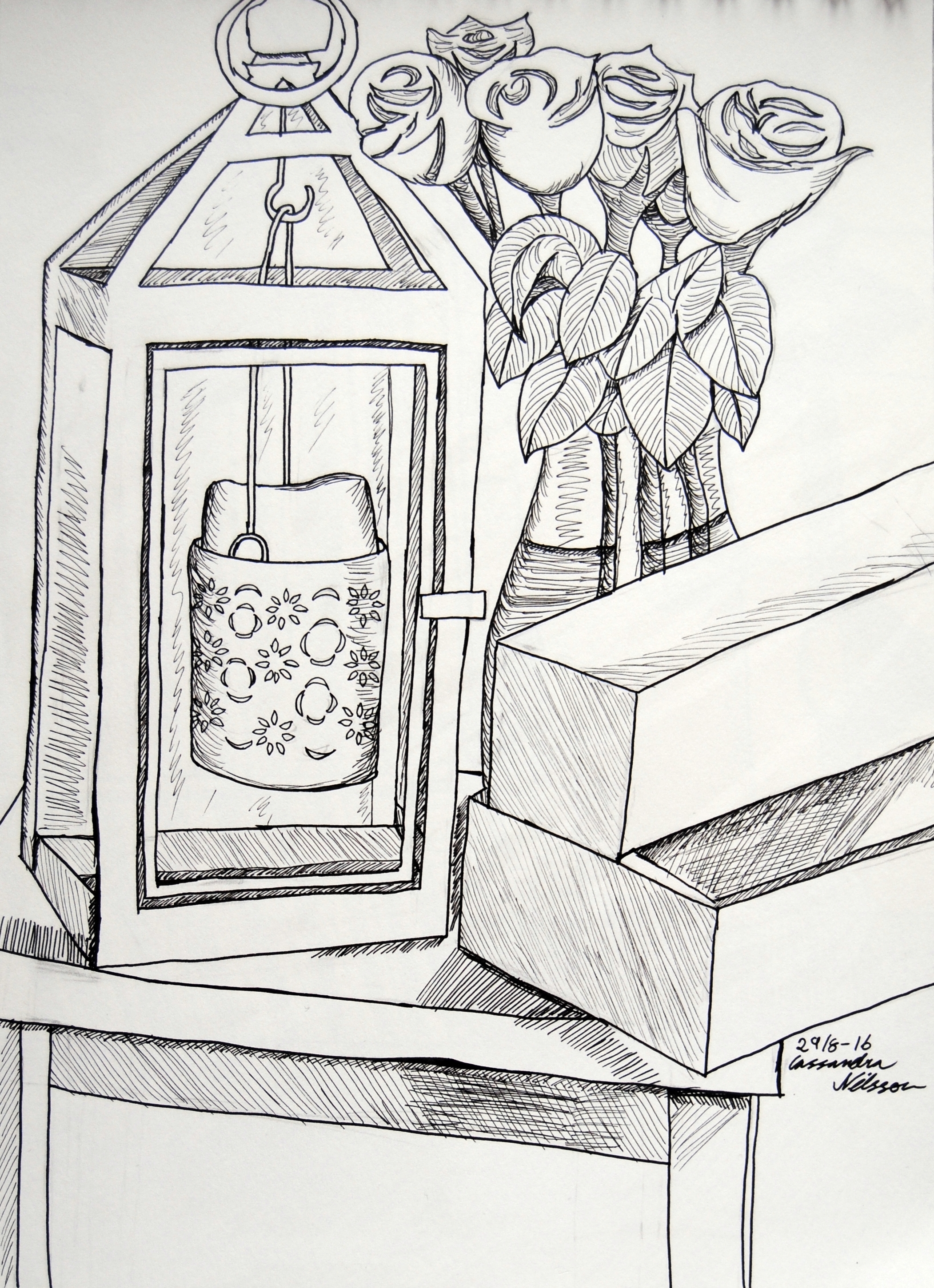 I liked how the boxes where sticking out from the table, combined with the lantern and vase of roses. I wanted to practice hatching and crosshatching, so I felt that ink pens were a natural choice. And I was still really happy with my purchase and wanted to use them as much as I could. I’m really satisfied with how this turned out.

So after doing some sketches, I decided to try to get back to drawing with ProMarkers. 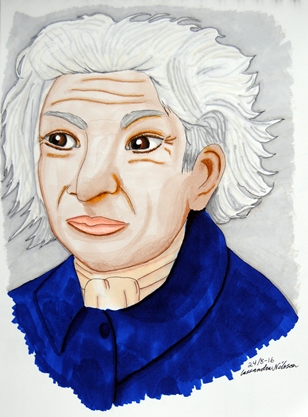 As I had just re-read Over Sea, Under Stone by Susan Cooper – her series is a childhood favourite – I wanted to draw one of the principal characters from the books: Merriman Lyon. His face as I imagine it is rather interesting and this picture turned out really close to what I wanted.

I struggle with drawing white hair. And wild hair. If anyone has any suggestions for how to do it better, what colours to use, I’m all ears. I ended up using ivory, cool grey 2, cool grey 4 and ice grey 2.

After the trip to the graveyard, it took me a while to get together with the Urban Sketchers group again. Life got in between: I had to dog sit, was ill, got tied up in other activities. But I really enjoy these get togethers so I decided to go.

We were supposed to sketch at another park called Kärleksparken (the love park), but the weather wasn’t with us so we had to seek refuge in a café instead.

I decided to draw the bar from where I was sitting, using ink pens. I felt that the drawing ended up being a little too detailed. I feel that the best part of the picture are the lamps, because I like the way the shadows show the shape and light.

I used to do a lot of water colour paintings, and it’s one of those things that I really miss. Last year I tried to do a landscape painting, but it turned out so horrible that I threw down the brush and haven’t dared to turn back.

2012 was one of those years where I did a lot of water colour paintings that turned out really good. 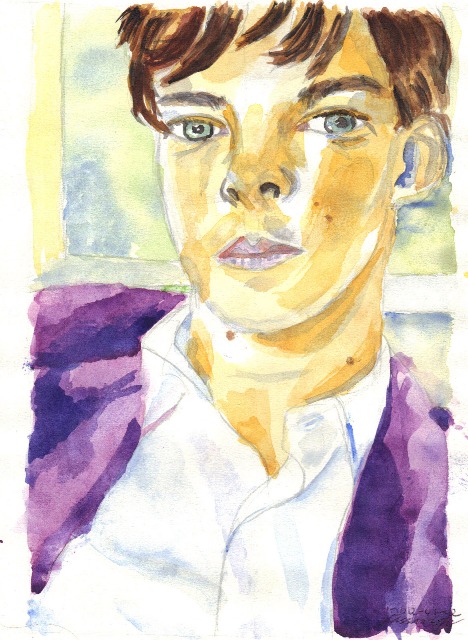 This is one of my favourites from that year. It’s based on a picture of Benedict Cumberbatch (I’m a huge fan) and I love how I used the colours and the shadowing. The colour palette is really nice.

I want to return to this medium, but I’m sure there’ll be a few growing pains. Maybe I should just get started and try not to care when the result turns out piss poor.