These are from the beginning of my illness, and as such they are rather sloppy. 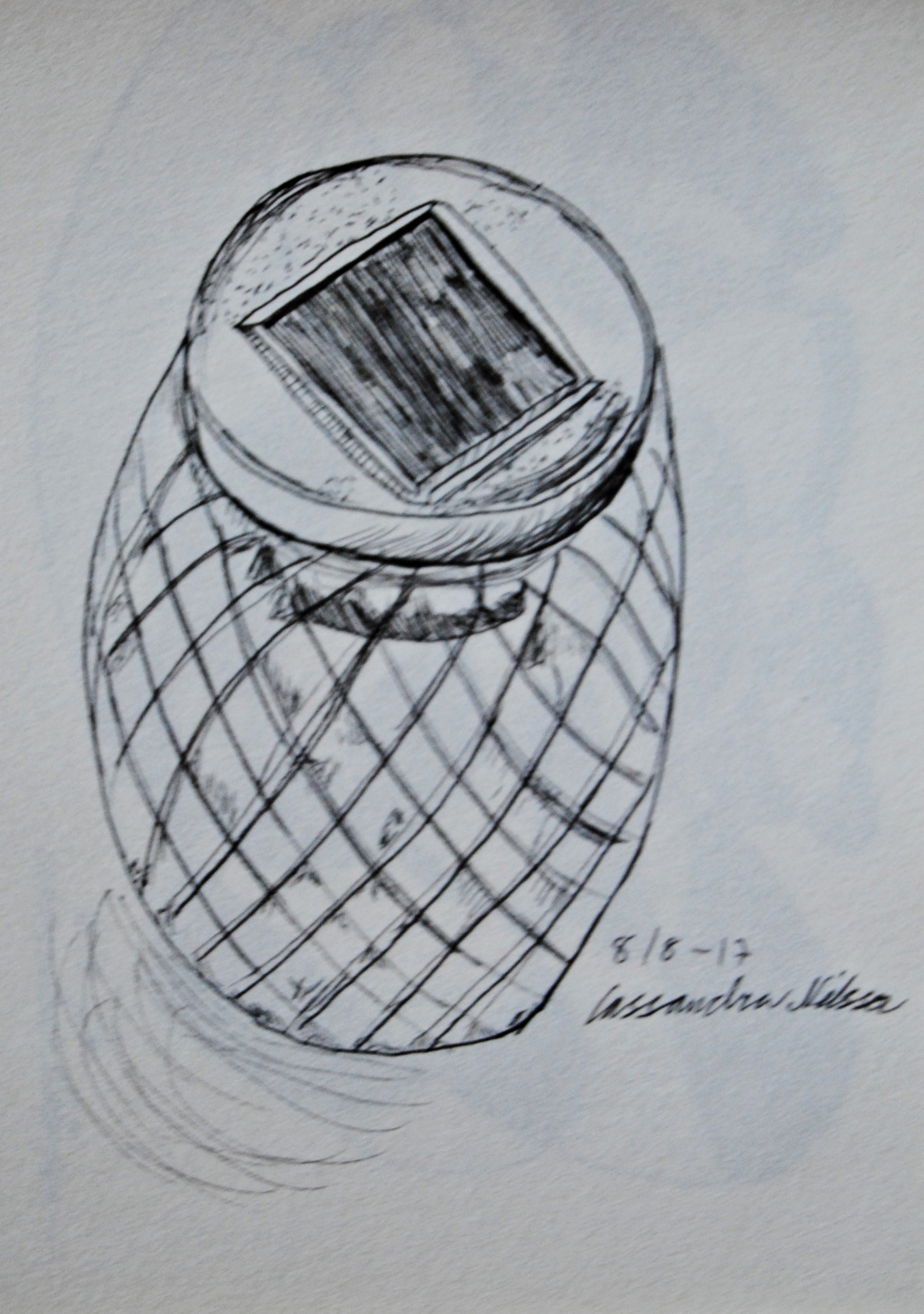 A rather awkward sketch of a lantern I keep on my balcony. 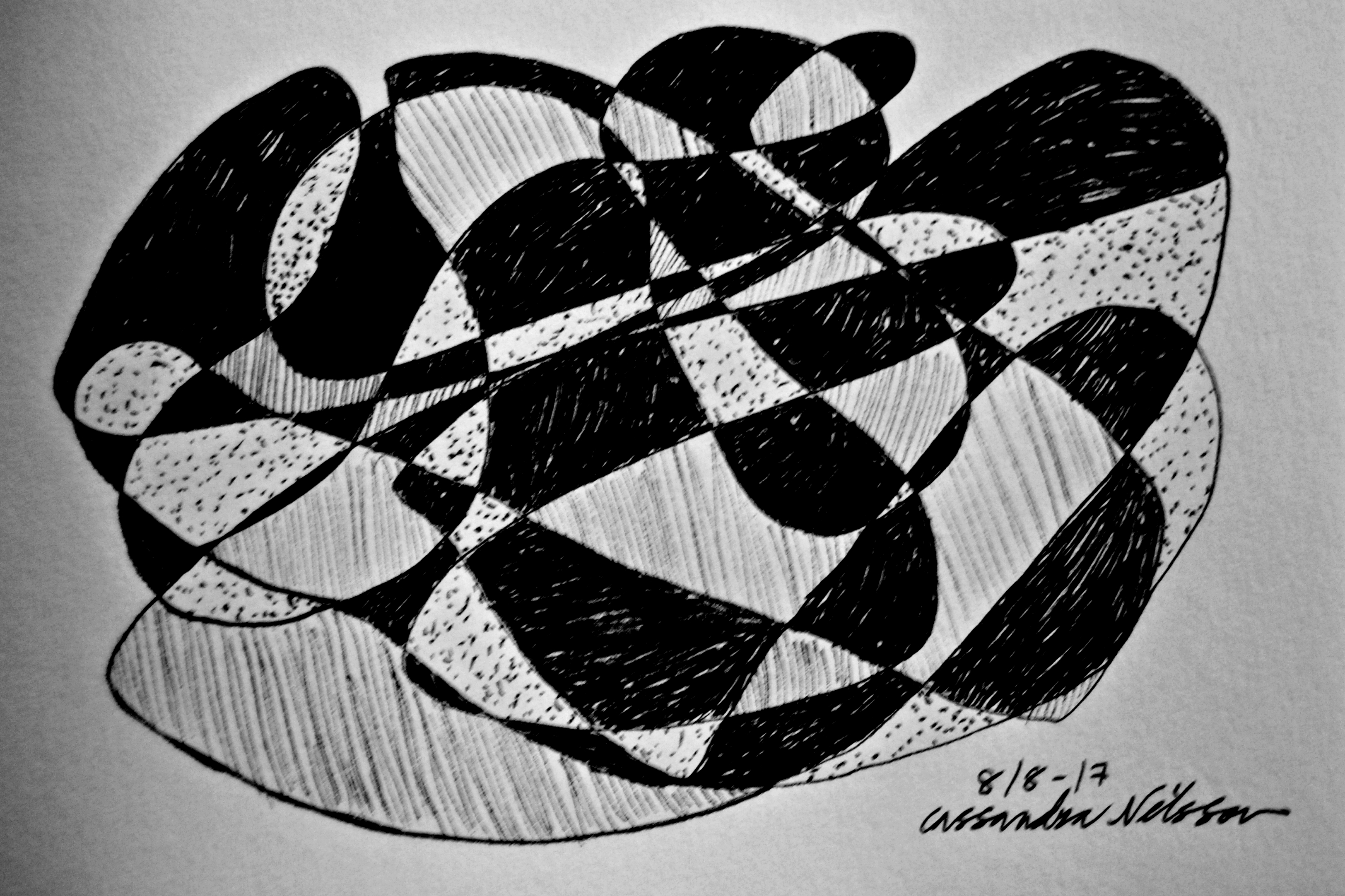 An abstract drawing that makes me think of a brain, for some reason. A chaotic brain. 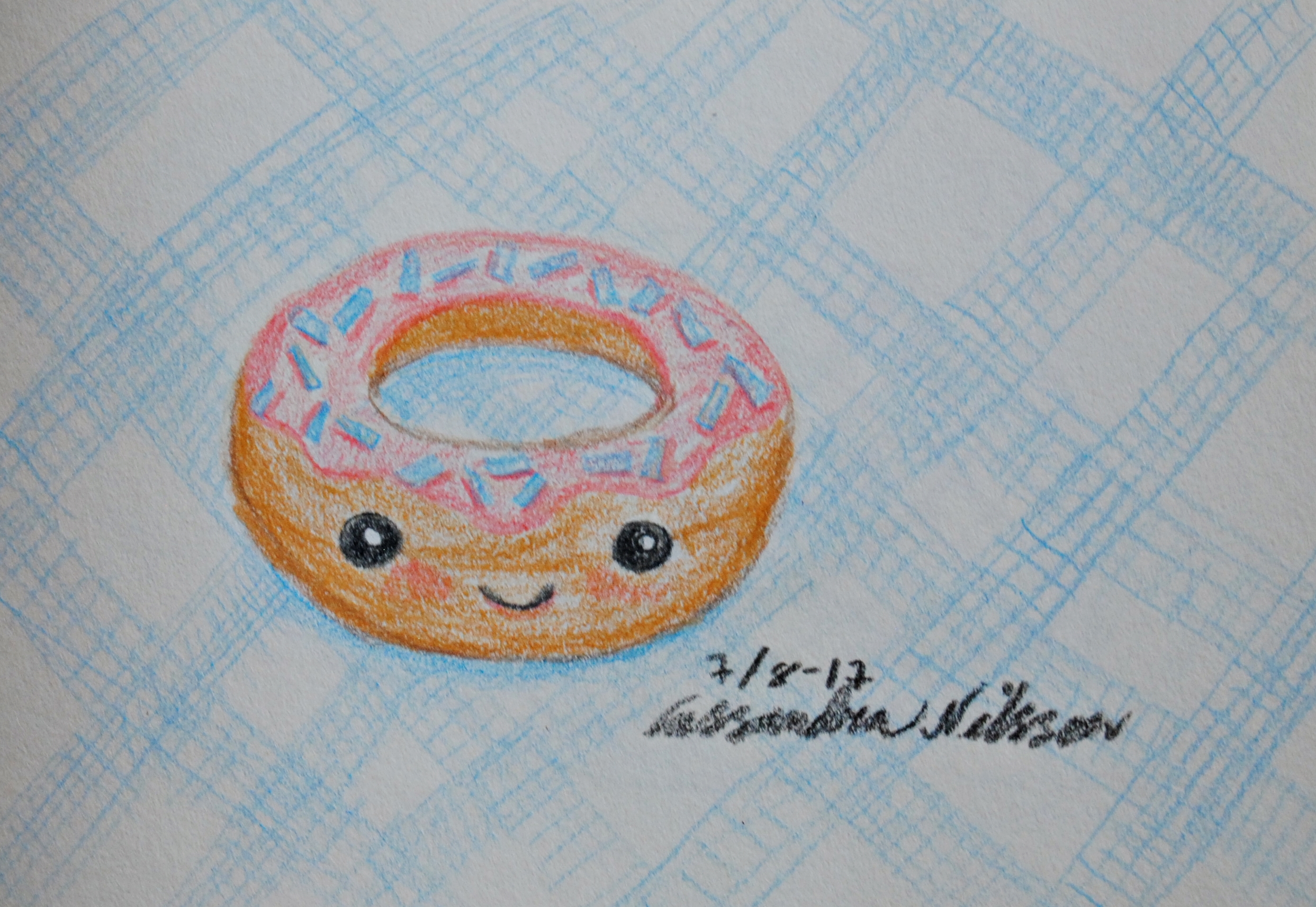 A silly/cute drawing I made one night.

Long time, no see. I’ve been ill for a while and haven’t really had the energy to manage the blog, but I’ve managed to produce some drawings at least. 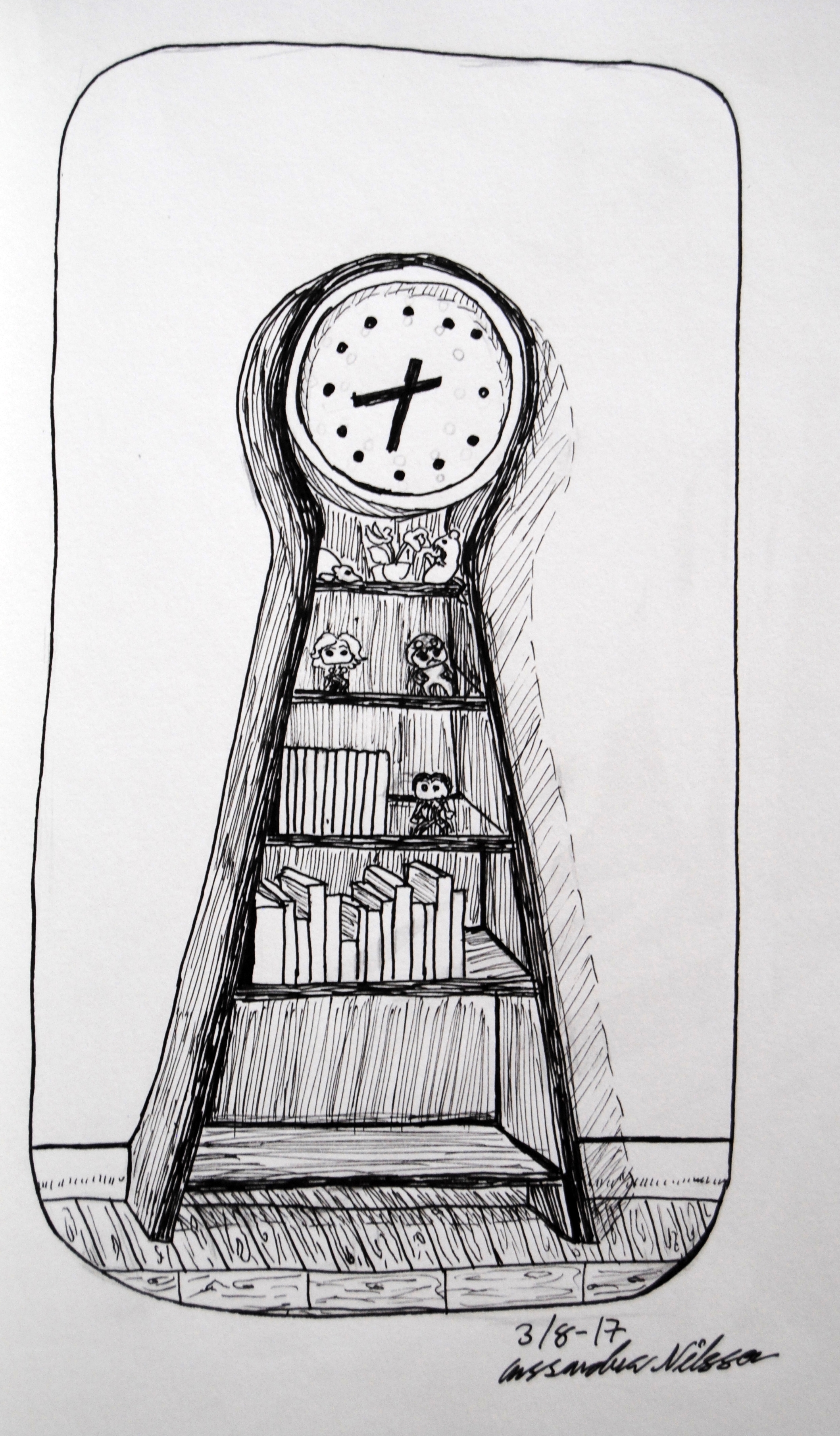 This is one of the more unique bookshelves in my home, but the shelf itself is actually from IKEA. Hard to believe, right? 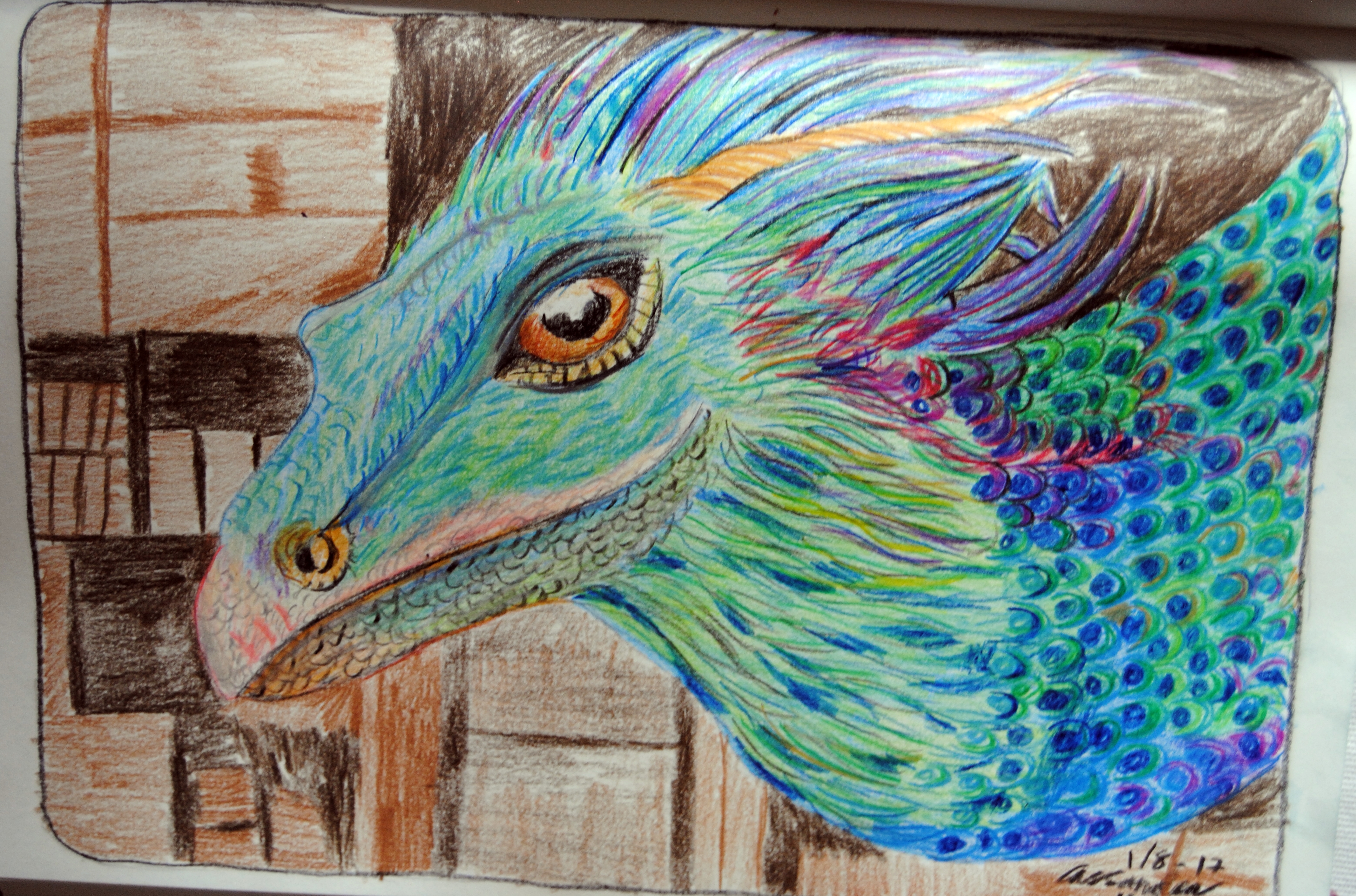 Some more fanart for the lovely film Fantastic Beasts and Where to Find Them. This time of an actual beast, an occamy. Since these creatures are really colourful and cute, I wanted the focus to be on the colour and texture of the occamy. Therefore I kept the background very simple and sketchy with shades of brown. 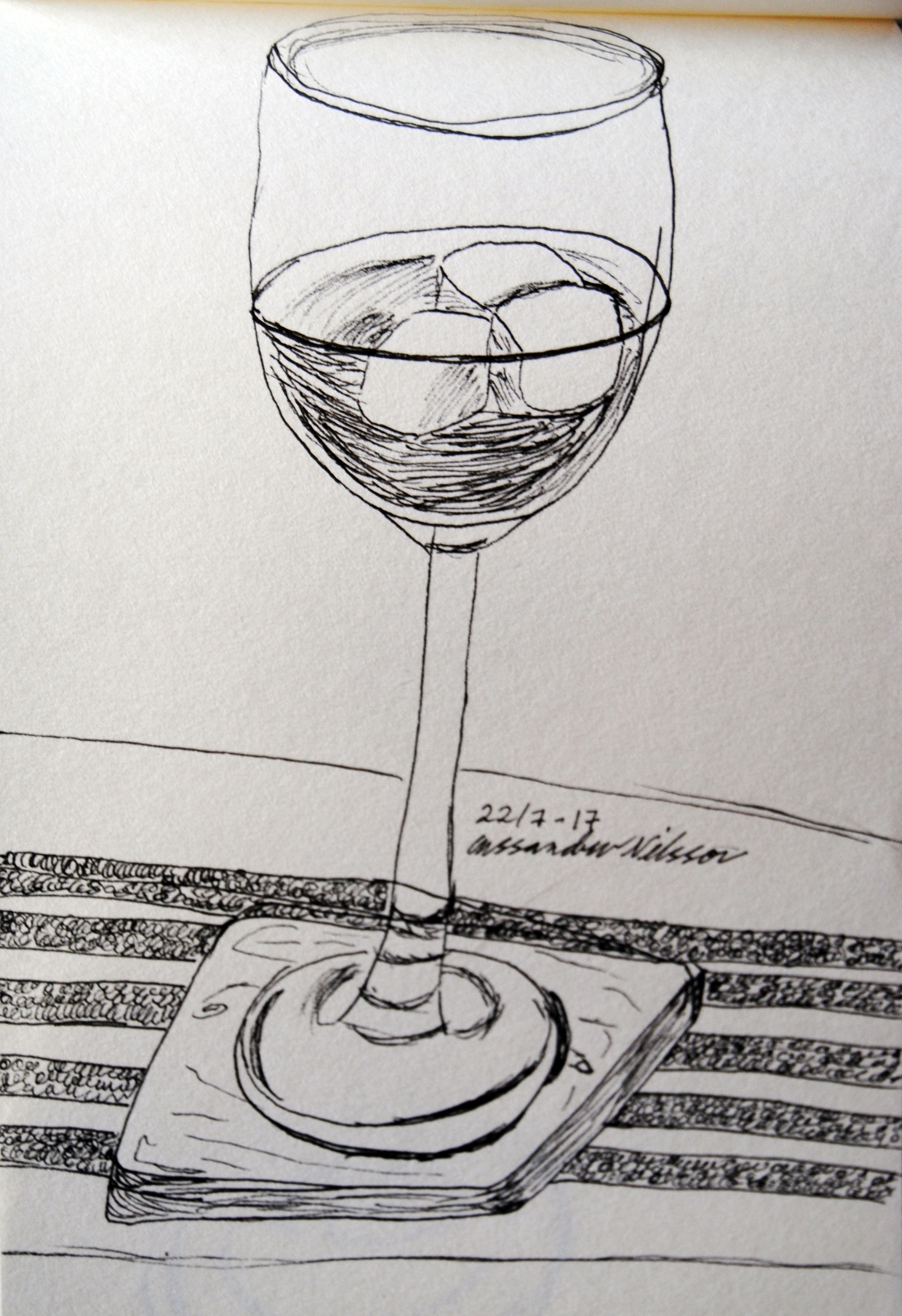 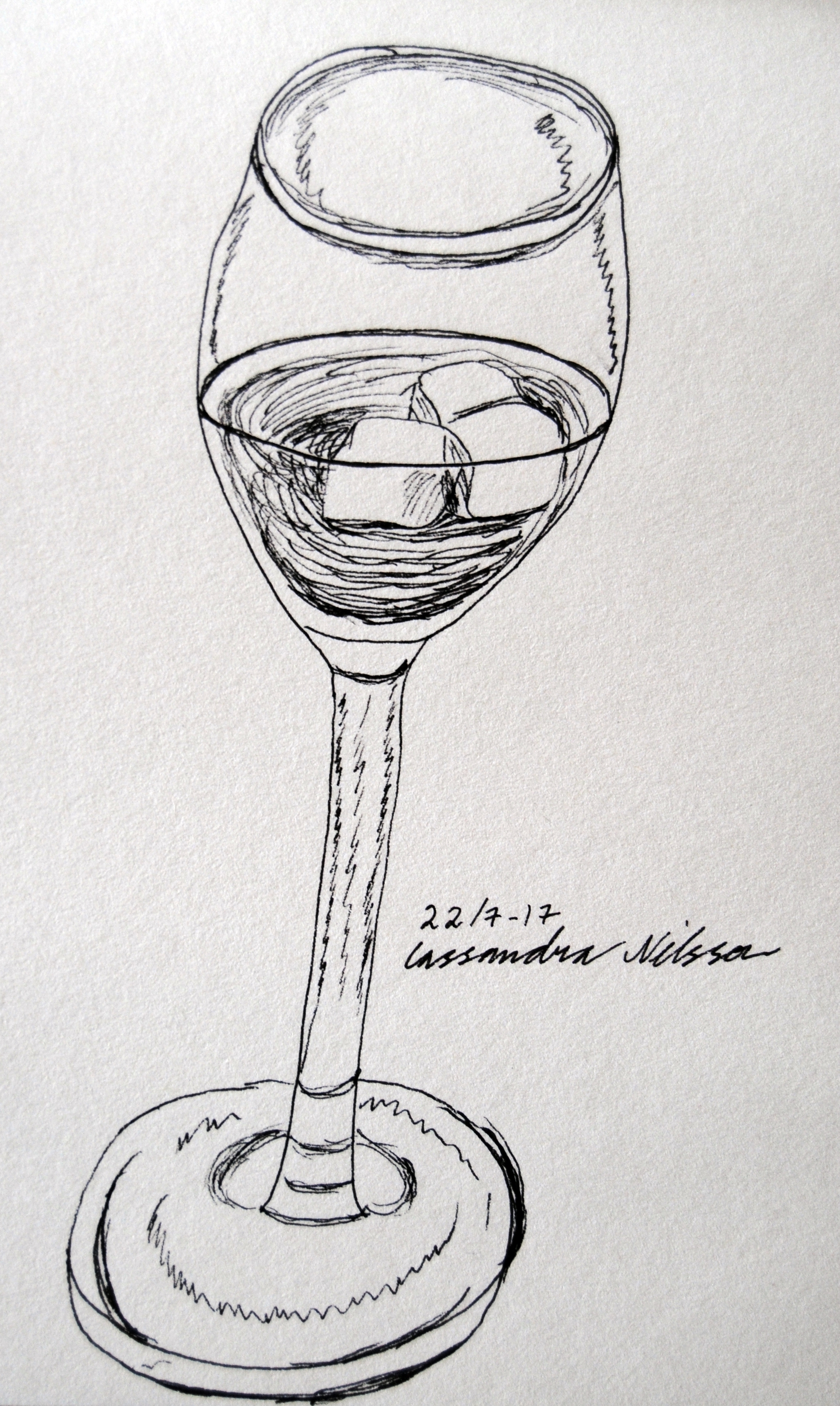 I made these two sketches while having a fever, which wasn’t a very good idea. The ice cubes turned out really neat, though. Another attempt at drawing with my pens without using pencil beforehand, which probably explains a lot.

Do you ever get an image stuck in your head that you want to draw? I’ve had this one of a man half-hidden behind a shower curtain in my head for ages. But when I tried to draw it, I ended up doing five different versions of the drawing and not be entirely happy with a single one. They all have different expressions that I like, but they don’t match the vision I had in my head. 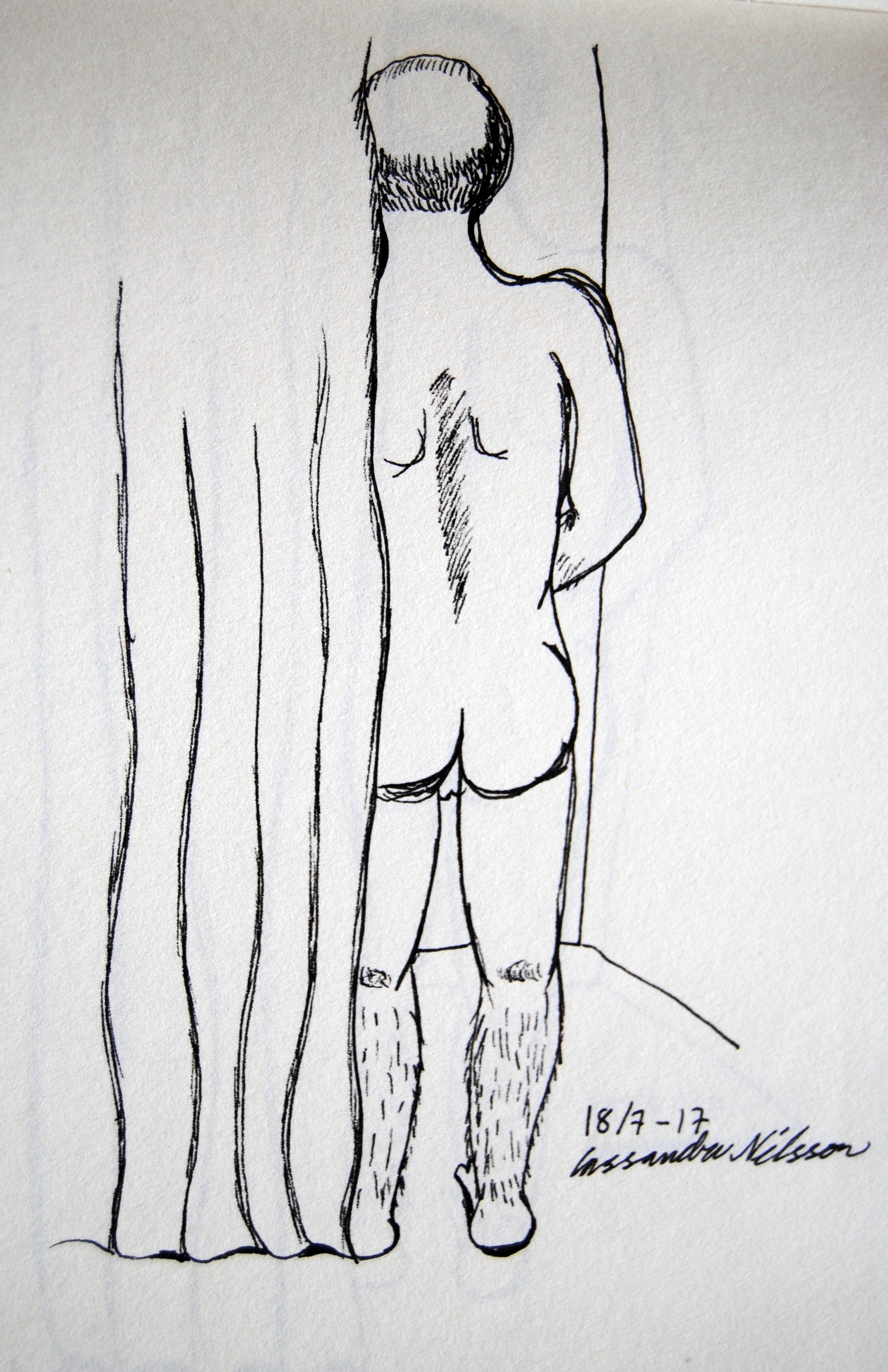 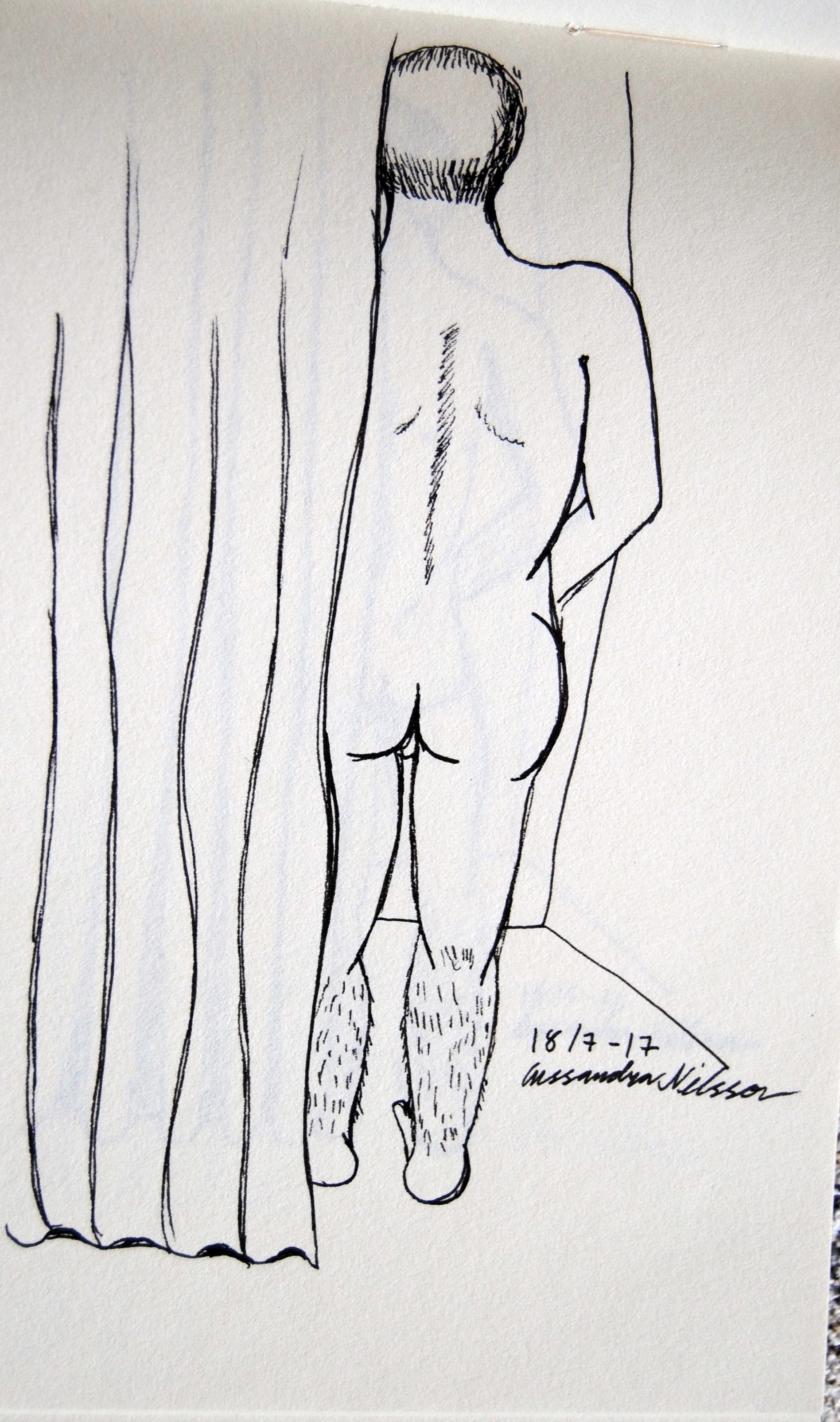 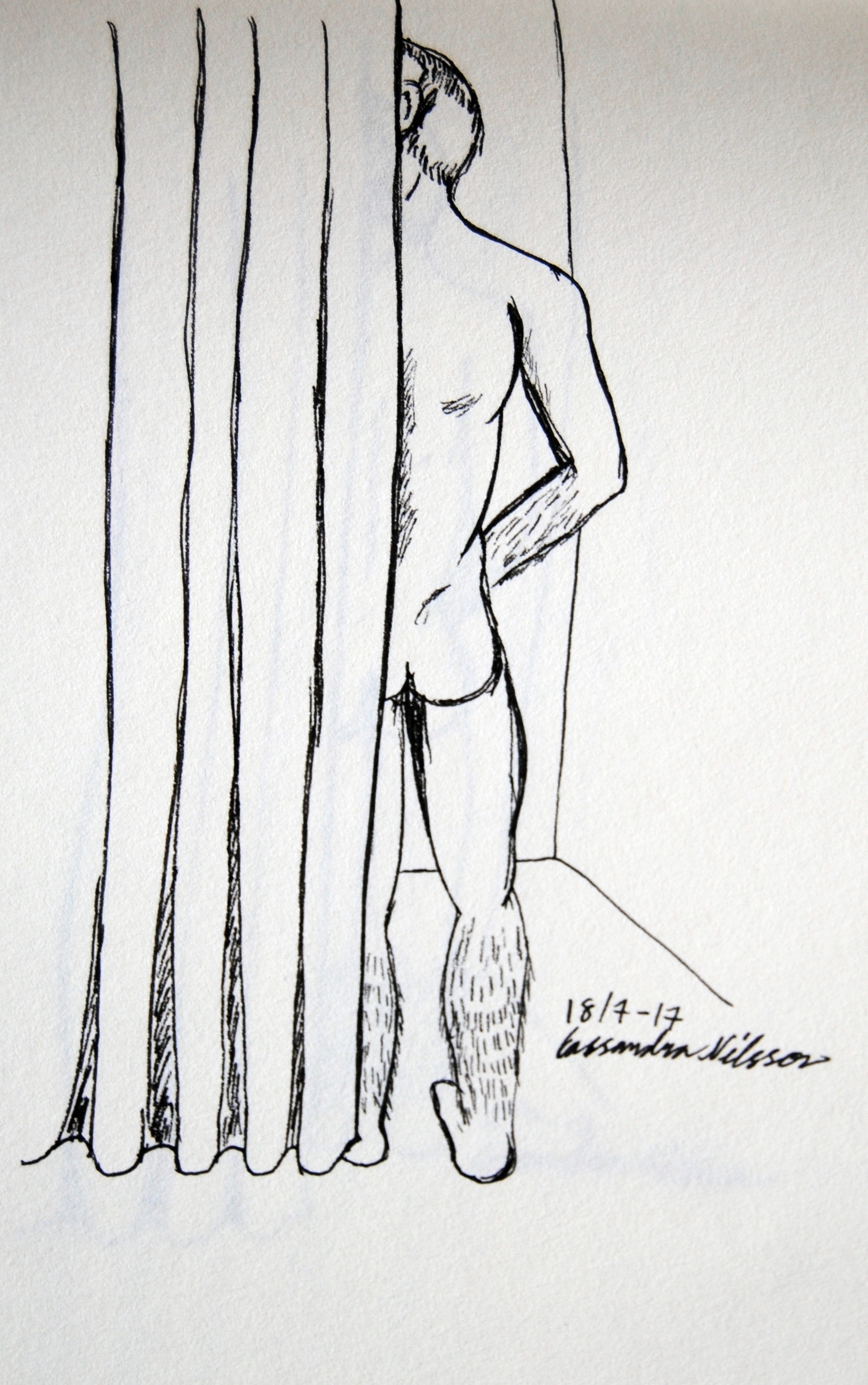 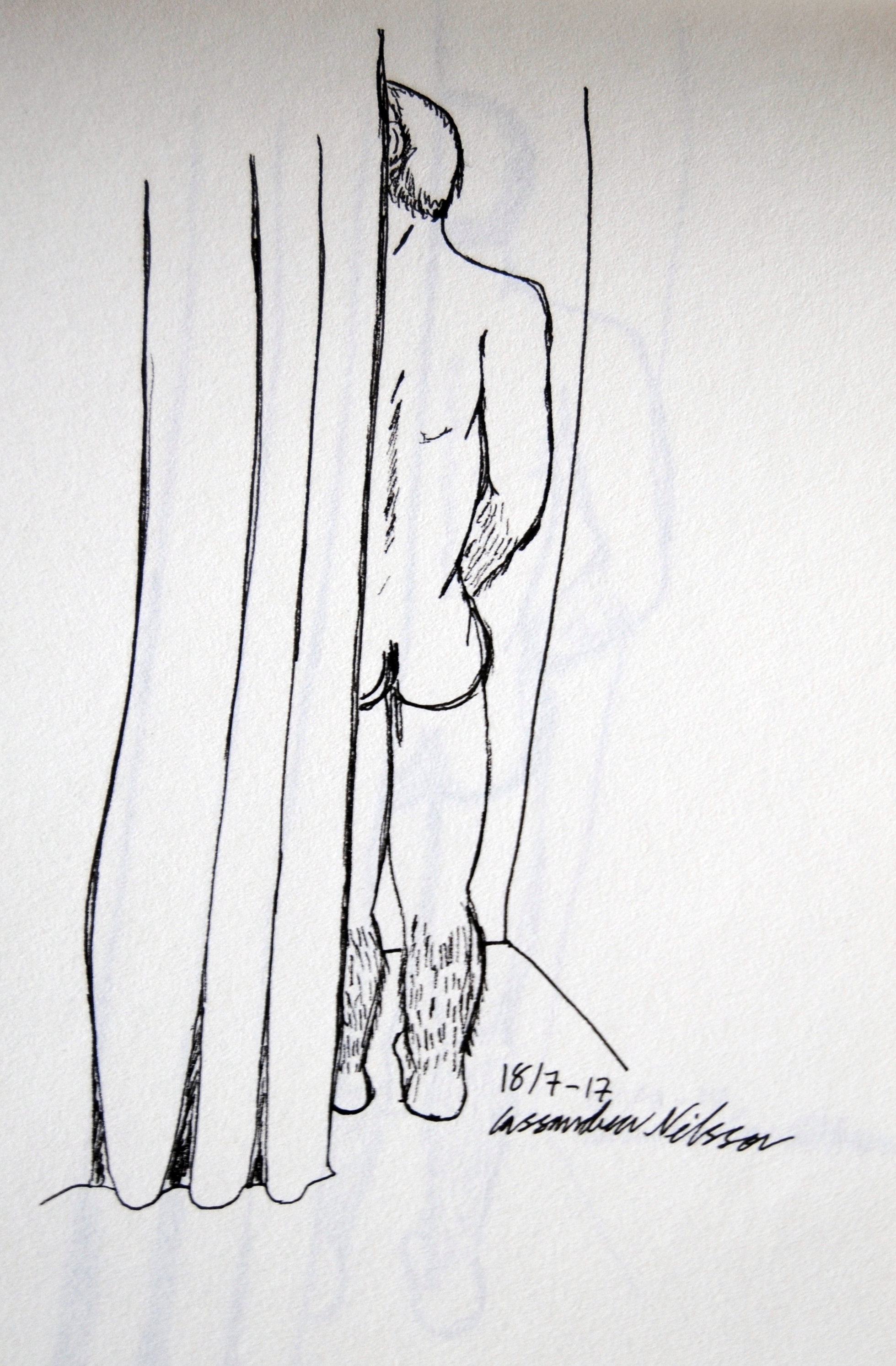 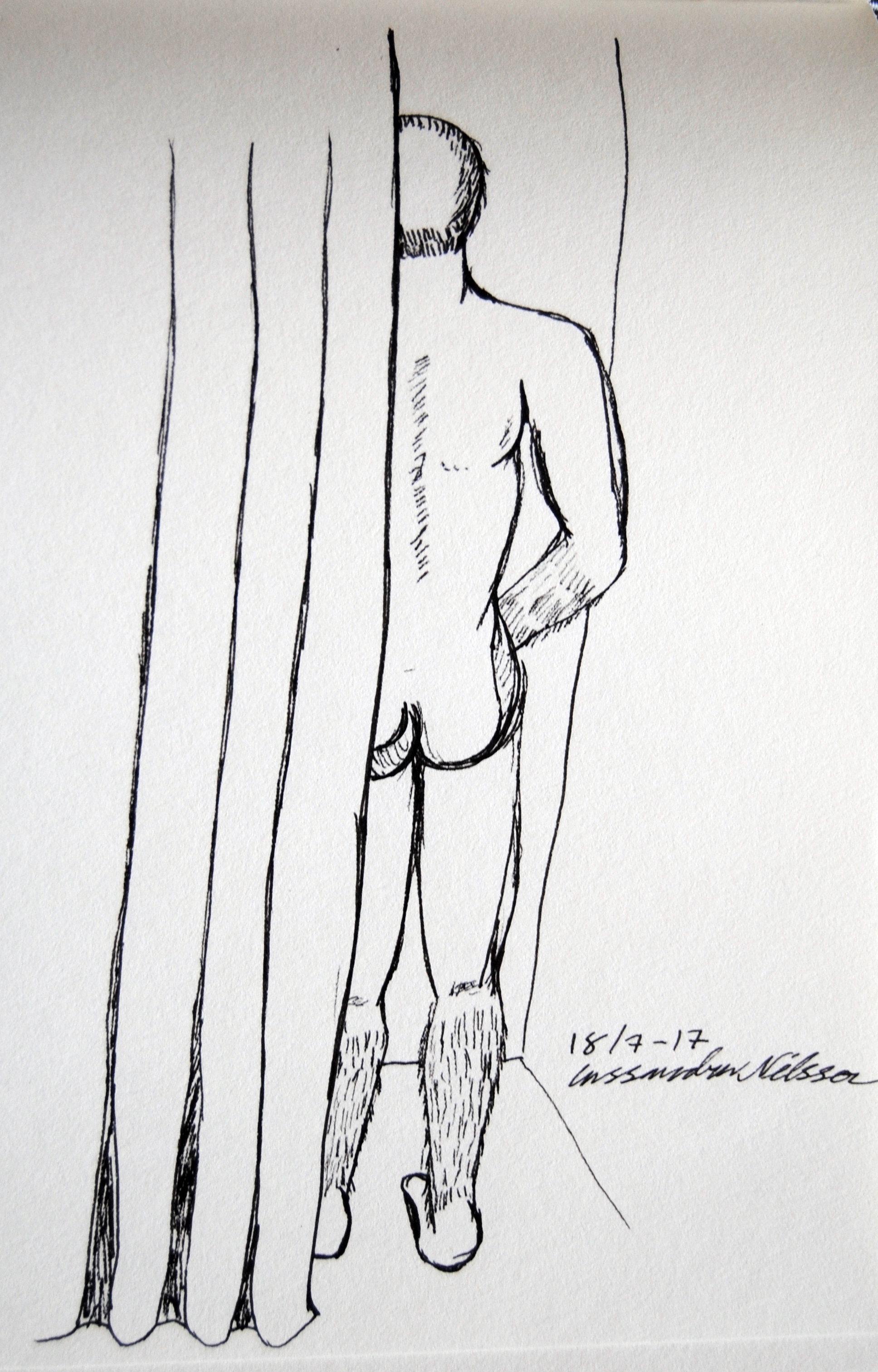 I did the first two during my break at work (I’m alone in our staff room during my breaks) with no references for anatomy. The third I did at home using a reference, which is why he turned out beefy all of a sudden. Then I tried to make a mixture between my original images and the reference.

I think I like number one and number five the best. Which one’s your favourite?

I spent an evening drawing some poppies in a vase. 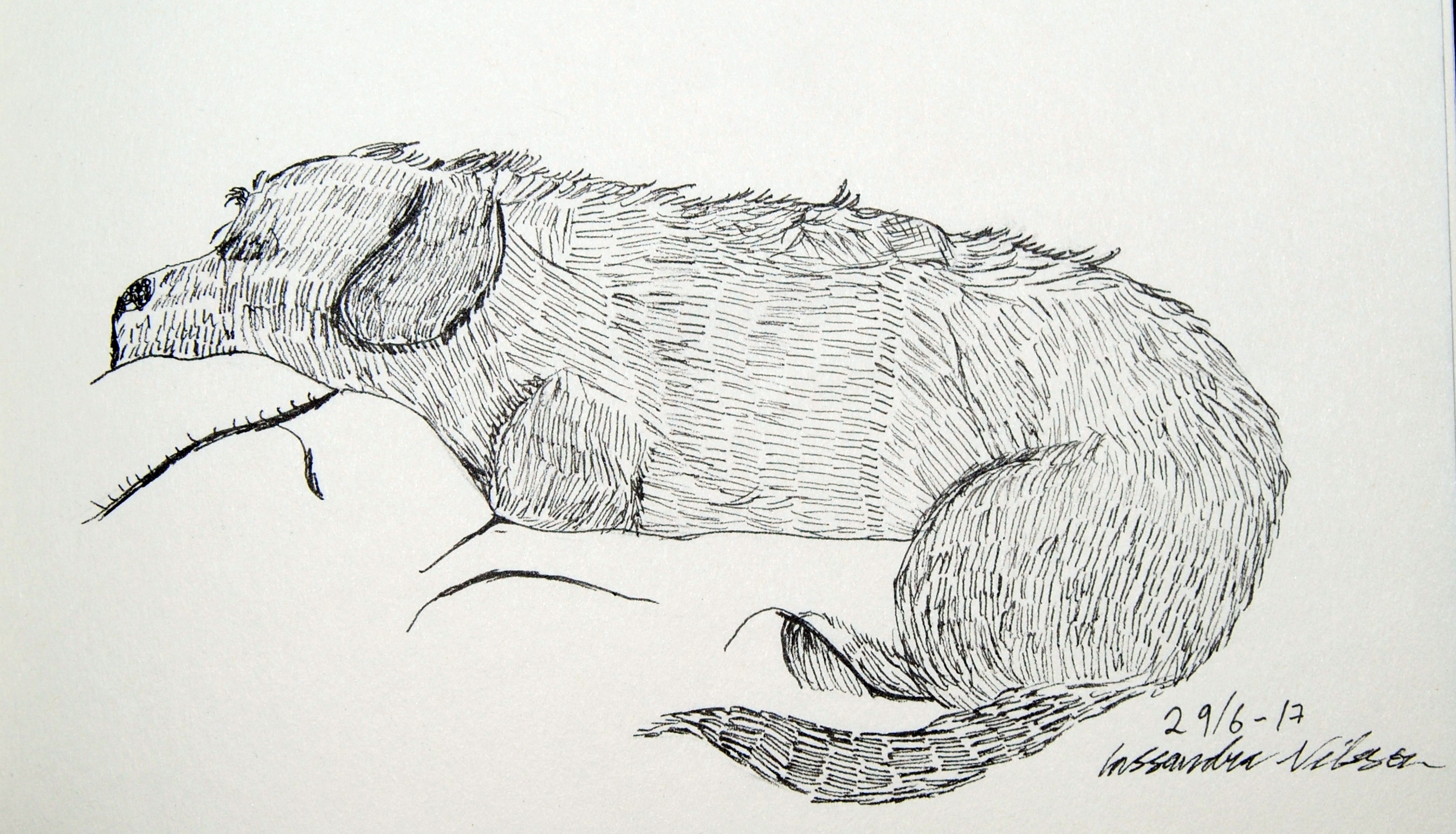 I went away on a brief holiday together with my family, and ended up baby-sitting my sister’s dog a lot. He wasn’t too happy with us being left alone in the hotel room and spent most of the time sulking.

Had to do this one quickly, because he up and left in the middle of the picture. There was a better place to sulk. 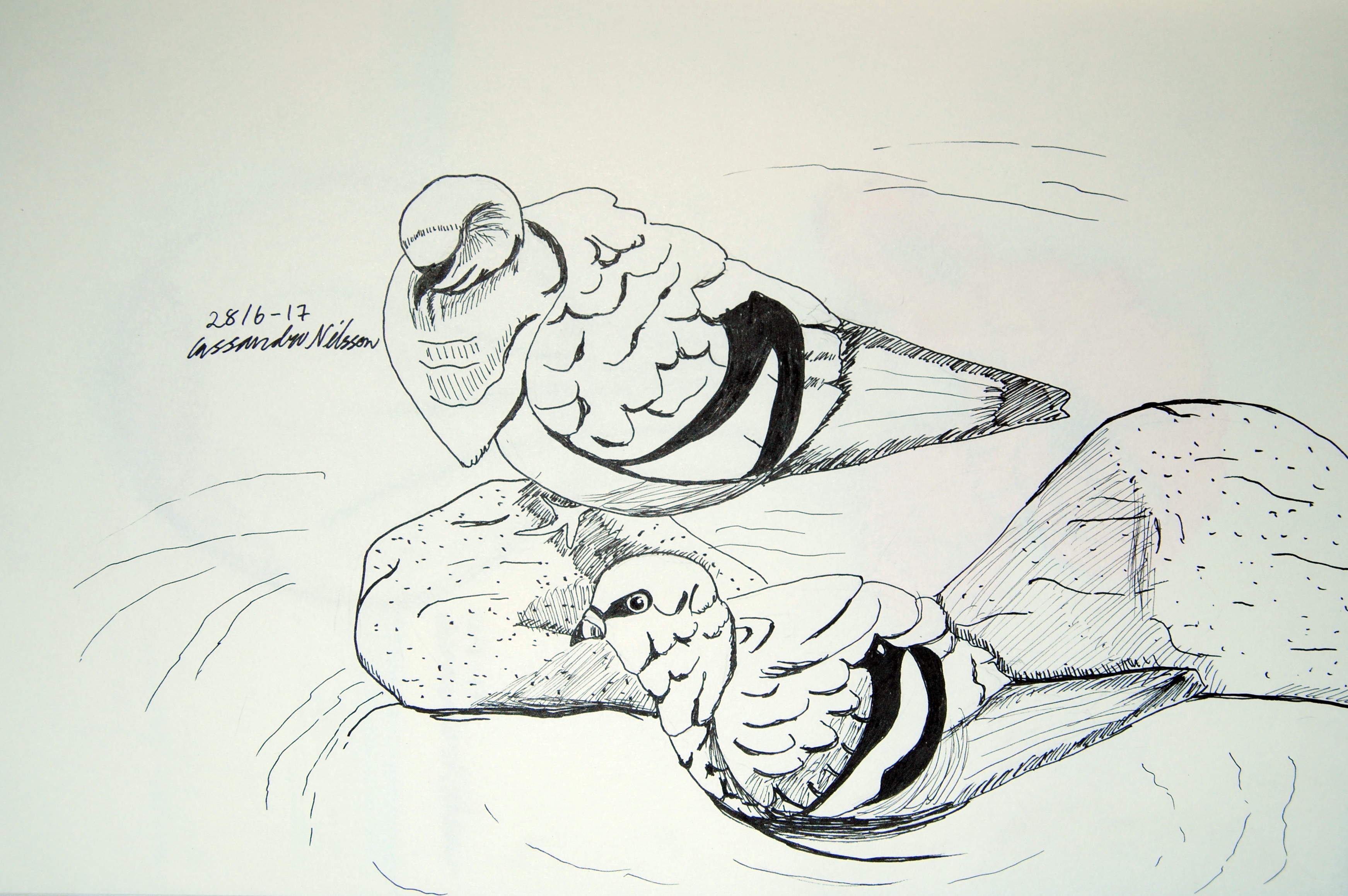 When I was doing my sketch at Strömparken, I noticed a couple of pigeons bathing in the stream and snapped a picture so I could return to draw it later. I did one evening and think the result turned out pretty nicely. Even if they don’t look that much like pigeons.

I didn’t actually draw this during a meet up, since I was too ill to attend, but since I live near the location I figured I could still contribute with a sketch from the neighbourhood. It’s been a while since I last drew a building and they have never been my strong suit, but I think this one turned out really well.